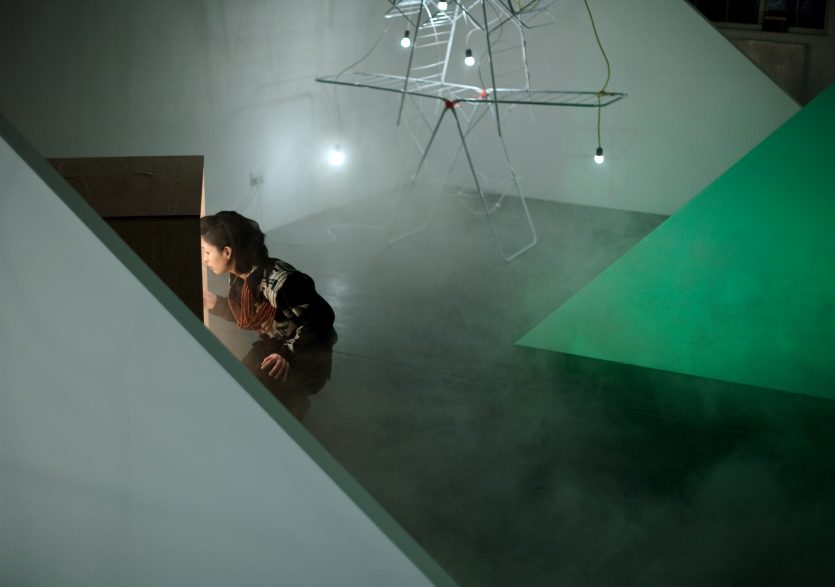 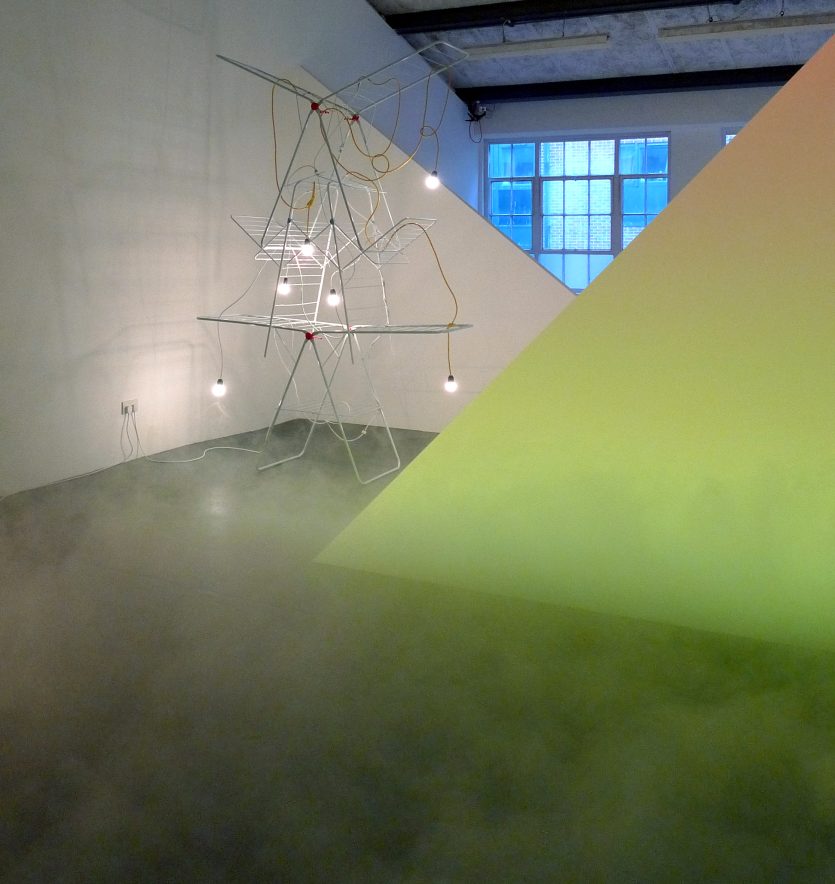 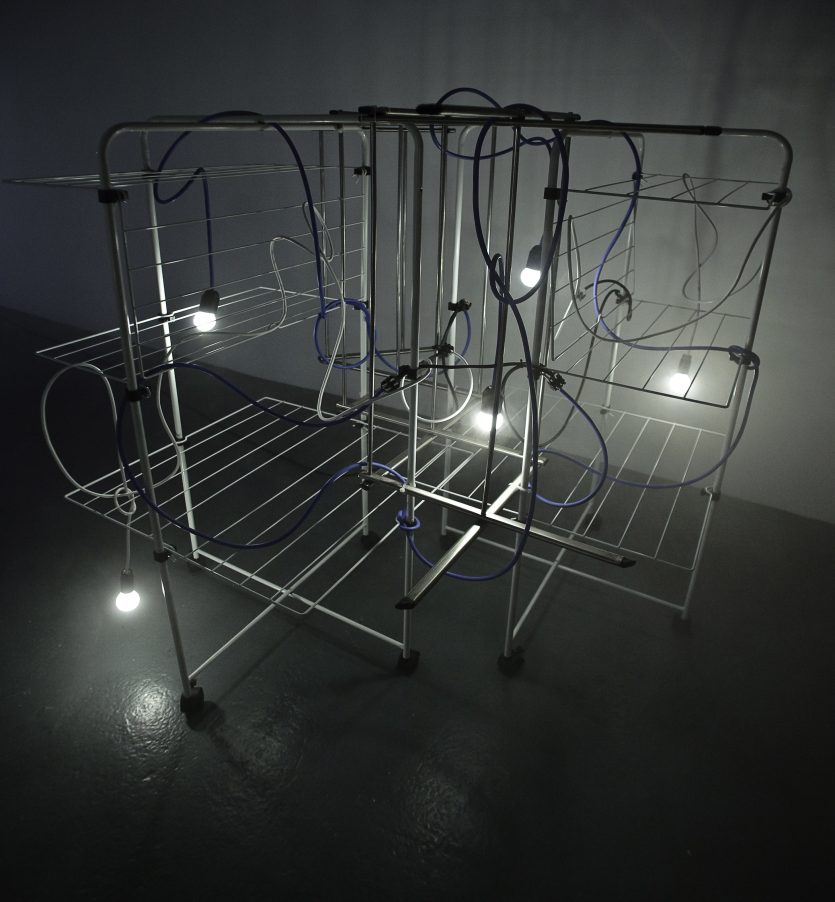 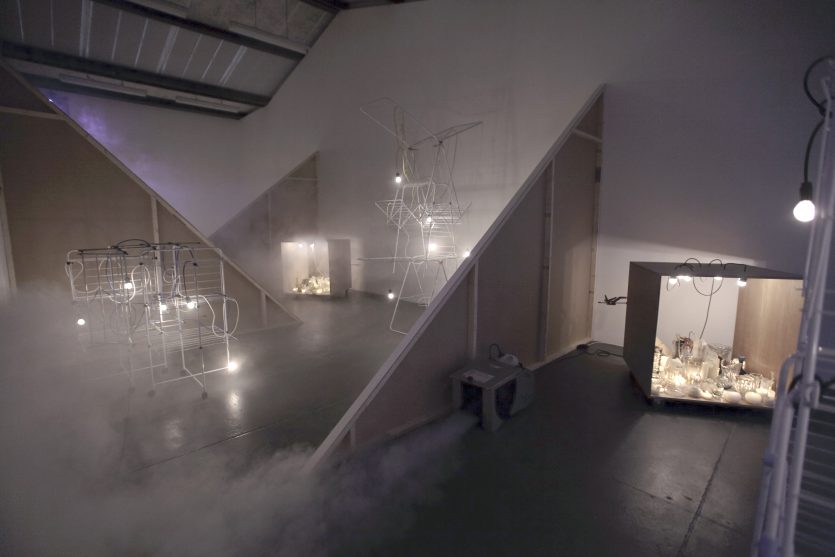 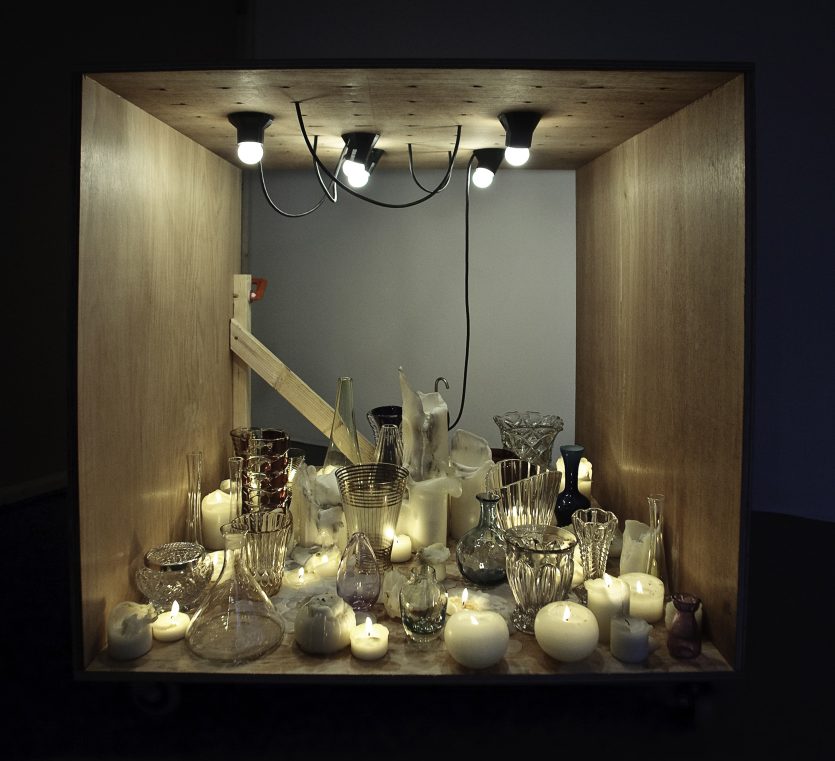 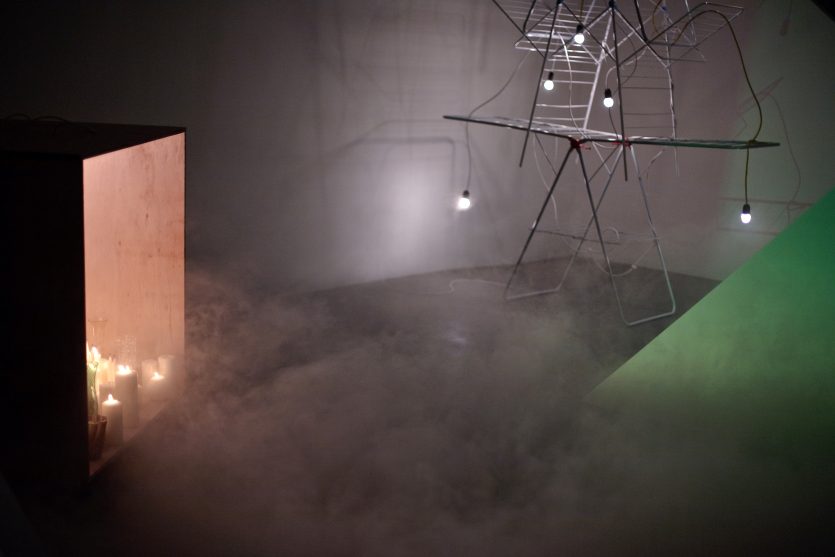 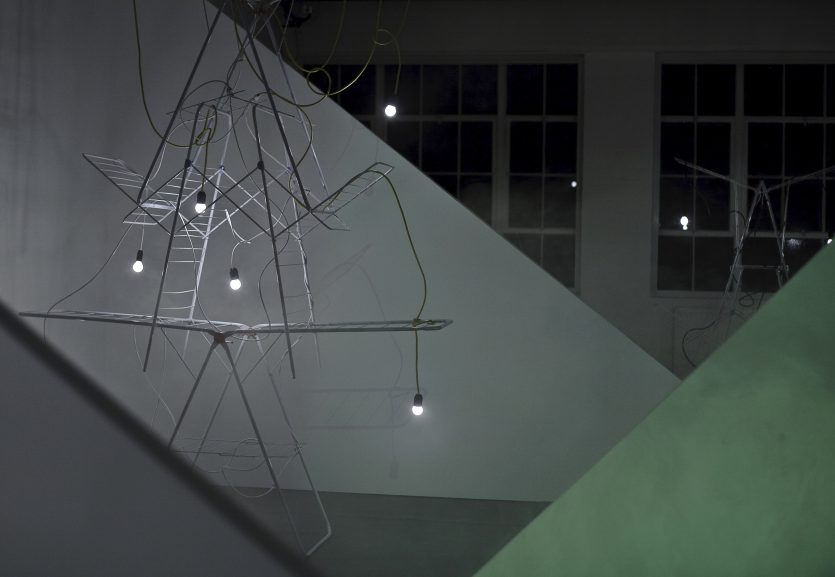 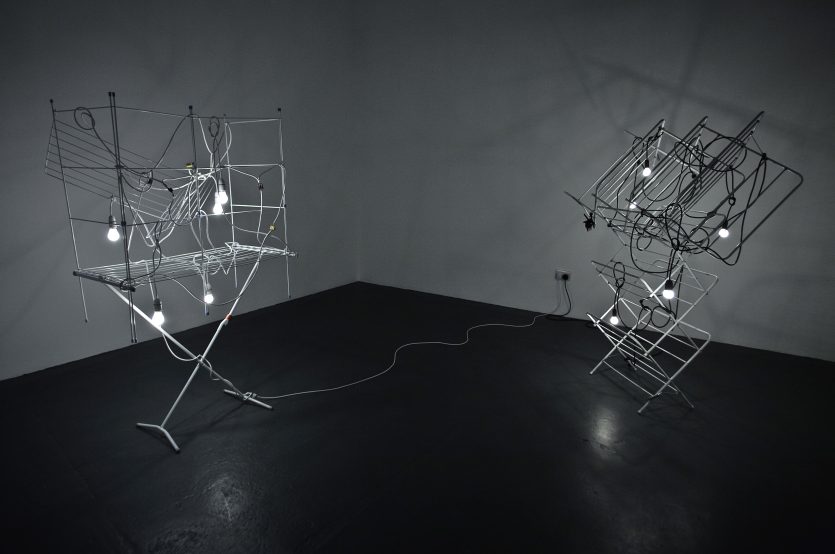 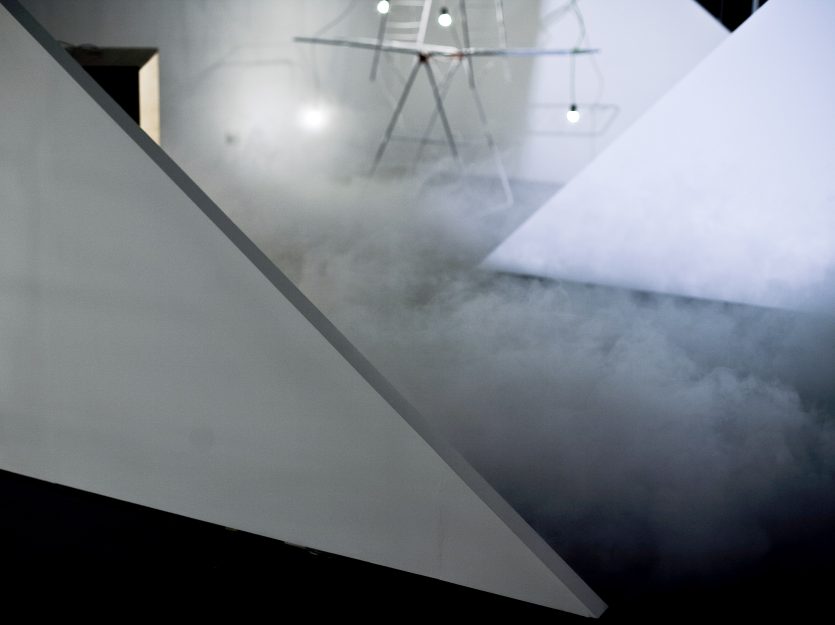 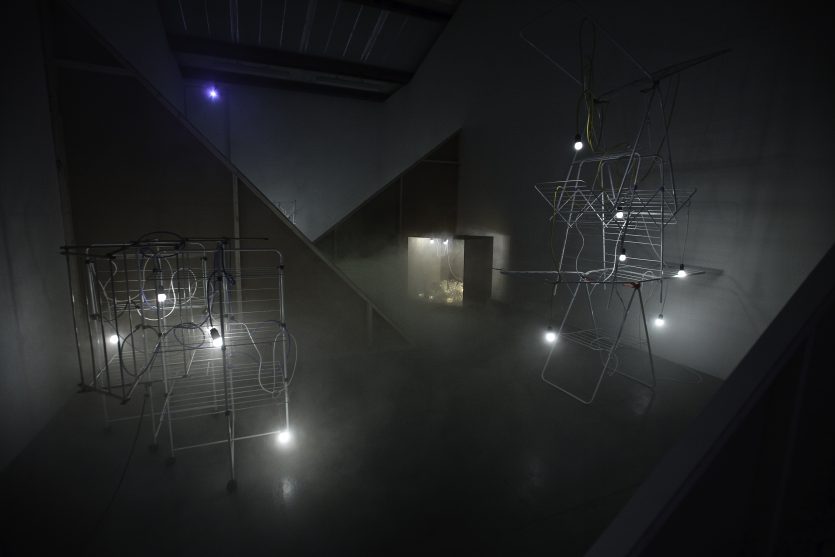 A key concern in Life: A Users Manual is the notion of ‘affect’. Often used interchangeably with the experience of feeling or emotion, it refers more precisely to an intermediate state of being distanced and fully immersed, of perceiving and understanding. It has the potential of transition: when you affect something, you are at the same time opening yourself up to being affected in turn, and in a slightly different way than you might have been the moment before. Affecting or being affected are not two different capacities – they go together.

Intro Motion Ditch evolved from a story Haegue Yang wrote in 2009 titled The Story of a Bear-Lady in a Sand Cave. The text references two existential stories; the first Dangun is the foundation myth of Korea. According to the legend, a tiger and a bear were instructed to eat only garlic and mugwort and remain out of sunlight for 100 days in a cave. The tiger gave up after twenty days, however the bear remained and transformed into a woman who then married the son of heaven and gave birth to Dangun, the forefather of Koreans. The second story Woman in the Dunes is a novel by Kobo Abe – later made into a film by Hiroshi Teshigahara (1964). It tells the story of a young widow forced to live in a wooden house at the bottom of a cavernous ditch in the dunes. There she is faced with the continuous task of shovelling falling sand to maintain her existence. In both stories the place of ‘home’ becomes a site of endurance, routine and act of devotion. In Yang’s story The Story of a Bear-Lady in a Sand Cave, the main character also lives in isolation, in a dark cave with blocked vision. There she diligently shovels out sand to survive, an act closely associated with life, but not necessarily a life without choice, it is a life by choice. As she bails out the sand she creates a wave like pattern, which becomes an aesthetic act as well as an ethical one. It is not understood by the others or adequately communicated between the two and is instead based on a singular devotion for the world.

In Haegue Yang’s installation Intro Motion Ditch, the viewer is invited into a seductive setting in which to encounter a number of objects. Three large geometric triangles divide the space acting as both a device to obscure and reveal. The use of fog machines further act as a tool to conceal as forms submerge and the ground slowly disappears – suggesting a place of fiction or myth. Mass produced household objects such as drying racks, light bulbs, candles and vases are assembled in carefully considered configurations across the gallery. Her carefully interwoven textual structure creates an underlying sense of unease and uncertainty. Yang transmits an existential view on deprivation, vulnerability and recognised human condition, elaborated through an artistic strategy of abstraction and affect.

For Yang, the ‘domestic’ acts as a metaphor for existence. The ‘domestic’ in the more homely or task driven sense is often thought of as a safe protective environment. It is less commonly associated with the tragic or pessimistic. In her book Practicalities (1987), Marguerite Duras – the French writer and film director – reflected on home as a place where people return to commit suicide. This characteristic of the home is a condition subtly explored in Yang’s practice through an implied or precise critique of social and artistic institutions or systems. She mediates a notion of abstraction that is underpinned by a rigorous conceptual focus even if underlying sentiment manifests rather specific narratives. This particular language of abstraction often characterised by sensorial devices, such as moving lights, scent emitters, fans and so on, enable the artist to translate her narrative into physical experiences in space.